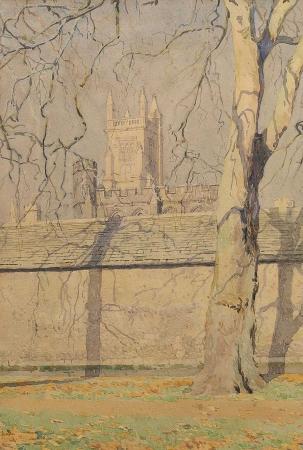 Bernard Cecil Gotch was born on 17th May 1876 at Chilcombe near Winchester. He attended Winchester School of Art, first as a student and then later in a teaching role.

By 1910, he had received his first notable commission illustrating ‘A Shepherd’s Life’ by W.H. Hudson, published by Methuens.

In 1914, he married Mary Fox, an accomplished violinist. They settled in Winchester where he continued painting.

Gotch completed a series of watercolours in and around Winchester, characterised by his muted palette that was typical of his early works.

Alongside painting, Bernard and Mary continued teaching in order to supplement their income. Following the war they lived for a year on the edge of Dartmoor where Gotch painted several churches in the area, as well as the surrounding moorland.

Bernard and Mary Gotch then moved to London, where Bernard had a studio near the Tate. He had one-man shows in Lincolns Inn and the Fine Art Society.

It was whilst in London that Gotch was approached to illustrate a book on the Public Schools of England, a project eventually abandoned; however, some of these watercolours were exhibited at the Fine Art Society in 1927.

During his time in London, Gotch was also painting some of his best architectural work of buildings in London. Financial security was elusive though, so Mary played the violin in hotels and theatres.

In 1925, Gotch moved to Oxford, eventually settling in Patchway, on Cumnor Hill. Working from his studio on the first floor of Patchway, he was soon busy taking commissions.

His works concentrated on the interiors and exteriors of colleges and were regularly featured  in one-man shows both in Oxford galleries and colleges. This included an exhibition every eight weeks in Oriel College Lecture rooms.

Throughout this period he regularly exhibited at the Royal Academy.

In 1952, the University of Oxford made Gotch an Honorary M.A. After he died in 1963 a memorial service took place for him in Oriel College. This was shortly followed by his Memorial Exhibition in 1964 at the Bonfigioli Gallery.