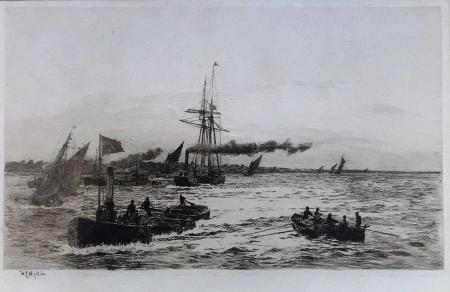 Sail and Steam – The Thames

William also made a study of the history of shipbuilding to help him with his paintings. He was influenced by Henry Moore (1831-1905), Whistler and Turner, of whom he later wrote a study (1905).

William also worked as a marine illustrator for the Graphic between 1870 and 1890. From 1883 he produced etchings for Robert Dunthorne of the Rembrandt Gallery.

In 1884, he published Tidal Thames, the first of a number of books that he both wrote and illustrated. He also became Marine Painter to the Royal Yacht Squadron and the Royal Victoria Yacht Club, where he did much work, including posters, for the Orient Company, the White Star Line and the Union Castle Line.

Often sailing in the barge Ladybird and in yachts, he made painting trips to Holland and Northern France. In 1917 he painted an aerial view of the Battle of Bourlon Wood. Air Marshal Trenchard assisted him by sending maps and aerial photographs.

Between 1924 and 1930 he worked on a Panorama of Trafalgar for the Victory Museum, Portsmouth. 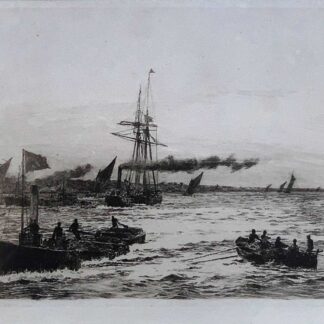 You're viewing: Sail and Steam – The Thames £695.00
Add to basket
We use cookies on our website to give you the most relevant experience by remembering your preferences and repeat visits. By clicking “Accept All”, you consent to the use of ALL the cookies. However, you may visit "Cookie Settings" to provide a controlled consent.
Cookie SettingsAccept All
Manage consent