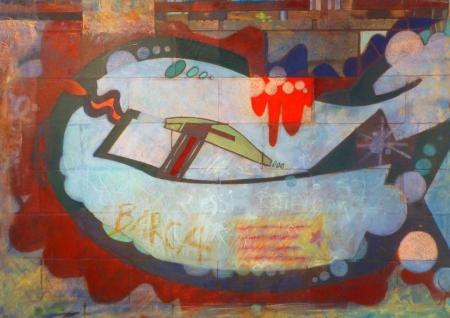 John’s artistic influences include the work of Kurt Schwitters, Antonio Tapies, Per Kirkeby and Gerhard Richter and like them John relishes the broad use of a variety of materials and processes. His images evolve through a dialogue between the internal idea or source of inspiration and the medium/media used to produce it. The work therefore becomes an autonomous entity with its own logical coherence with sometimes only a glancing relation to what exists outside its frame.

John has exhibited widely, both in this country and abroad, participating in two Biennales in Monaco and one in Cleveland, UK. He recently showed in a fund raising exhibition at the Saatchi gallery in London. His work is in many public and private collections, including those of Bristol education authority, Kent authority and Hampshire County Council.