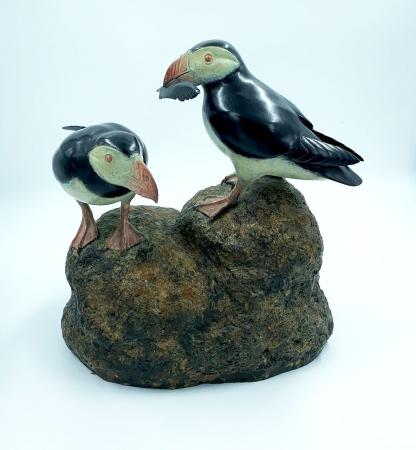 A stunning bronze sculpture of a pair of puffins on a rock. Number 5/12 and the last one left in the edition.

Chris Manley lives in Wales. His early training was as a chartered accountant, before becoming a wine merchant. After this he spent time as a commodity broker,  and he followed this by 15 years farming trout.

In 1987 he gained a BTEC Diploma in Natural History Illustration from Poole Art College.

His first sculptures in wood were produced in 1992. Encouraged by public response to his carvings, Chris concentrated solely on making and selling his work. He would travel around the country to such events as; the CLA Game Fair, Badminton Horse Trials, Royal Bath & West Show.

In 1995 Chris won the £500 first prize at the National Exhibition of Carved Birds, Pensthorpe, Norfolk, where he still exhibits annually.

He has also had work selected for the Royal Academy Summer Exhibition and for the Society of Wildlife Artists Annual Exhibition in London.

He annually demonstrates his skills as Artist in Residence at the Nature In Art Museum at Wallsworth Hall, Gloucestershire.

Chris was also elected to the Royal British Sculptors Society in 1999.

One of his projects was to create elephants, tigers and birds of prey, for installation on cruise-liners.

He is now producing smaller scale bronzes more suitable for private collectors. Chris was thrilled to have a piece of his work selected for the annual Birds In Art exhibition. He was chosen alongside internationally famous artists, at the Leigh Yawkey Woodson Art Museum in America.

Chris Manley says: “The quality of natural forms that most interest me is that of elegance; that beautiful combination of design and function that adapts a creature to its lifestyle. Birds often exhibit extreme adaptations and so are particularly interesting.

I love the way the contours of living creatures flow together to form the whole, which I tend to emphasise with smooth shapes and minimal detail, be it bird, animal or even the female form. The viewer is invited to experience the tactile quality of the sculpture, a sensation too often ignored.” 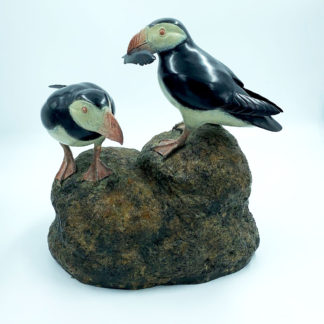 You're viewing: Puffin Pair £2,950.00
Add to basket
We use cookies on our website to give you the most relevant experience by remembering your preferences and repeat visits. By clicking “Accept All”, you consent to the use of ALL the cookies. However, you may visit "Cookie Settings" to provide a controlled consent.
Cookie SettingsAccept All
Manage consent