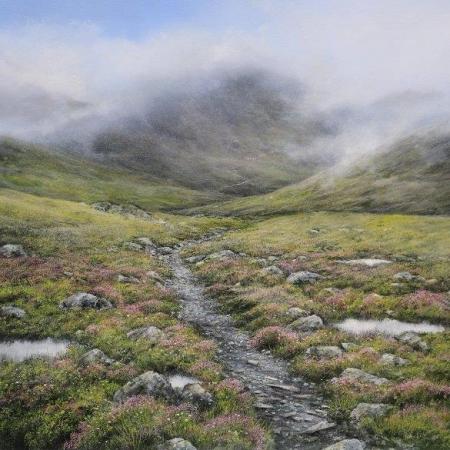 Garry Pereira was born in 1974 and studied art at Norwich, Loughborough and Lowestoft Colleges of Art and Design. Garry regularly exhibits his paintings at art fairs in the UK and abroad, and has hosted solo shows in London, Southwold, Cambridge and Norwich. In 2005 he was awarded First Prize at the Public Eye Exhibition in London, and was the Winner of the Laing Painting Competition in 1999. Garry has for a long time been inspired by waves and dunes along the Norfolk and Suffolk coast line, an area he has a strong connection with. Increasingly longer stays in North Wales and Scotland have provided a new fertile source for his landscapes.The painting process for Garry starts with making small studies in oil outside on location, they are then worked into larger more detailed paintings back in his Norfolk studio. The incorporation of traditional techniques and materials give his work an almost photographic quality. His studio-based paintings are made by layering around one hundred washes of thin oil paint and the incorporation of traditional glazes and varnishes which he makes himself.