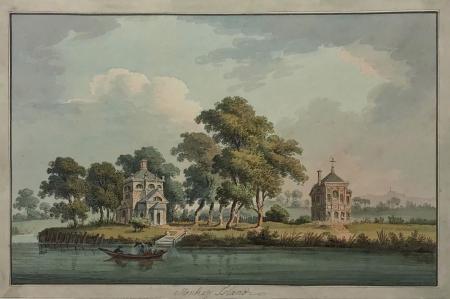 In wonderful condition this watercolour, pen and ink drawing of Monkey Island was drawn circa 1780’s. From the condition it looks as if it has always been kept in a folio and out of the sunlight.

Monkey Island enjoys a remarkable and intriguing history. Its exotic moniker is a source of debate, which some historians link to the Church’s early ownership. In 1197, monks attached to Merton Priory settled nearby, building fishponds close to the island christened Monks Eyot (island) – the possible root of the modern name.

It took 300 years for the clergy to finally release its ageing grip, selling it onto the Englefield family. Change was in the air, hastened by the 1666 Great Fire of London when barges dumped rubble from the capital’s reconstruction onto the island, raising it above flood level and creating a suitable site for building.

Cue the 3rd Duke of Marlborough. He bought the land in 1723 to create an angling retreat like no other. He commissioned two buildings from Palladian architect Robert Morris: a two-storey Fishing Temple and octagonal Fishing Pavilion for sleeping and entertaining.

The ceiling of the Pavilion’s ground-floor Monkey Room, completed by 1738, was slathered in singerie: depictions of monkeys punting, fishing and hunting by French specialist, Andie de Clermont. 100 yards away The Temple’s interior was decorated with shells, mermaids, dolphins and Neptune in high relief plasterwork;
the work of Thomas Roberts of Oxford.

The Duke escaped to his fishing idyll for two decades before dying in 1758, leaving a more obvious reason for the island’s unique name. Rumours, completely unsubstantiated, added to the myth, claiming insane George 111 was banished here with a pet monkey. Instead it was the common man who was increasingly enjoying the local river. By 1840 the Pavilion had become a riverside inn, where, 30 years later, Mrs Plummer the landlady served drinks through the
bar window next to the Monkey Room.

It was the start of a golden era. Visitors included monarchs – a 1905 photograph shows Edward V11 enjoying afternoon tea under the walnut trees – and showbiz royalty such as famous singers Clara Butt and Dame Nellie Melba. Sir Edward Elgar worked on his First Symphony Violin Concerto in The Hut, a house on the adjacent bank. Famous literary visitors included WW1 poet Siegfried Sassoon, and H.G Wells and lover Rebecca West, whose 1918 novel The Return of the Soldier centred on a past affair on Monkey Island. 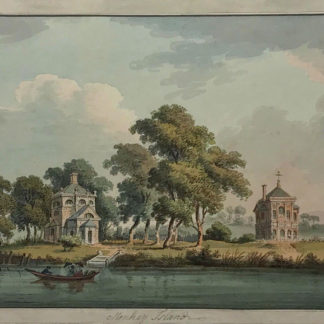